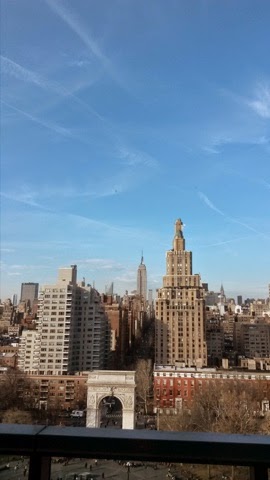 A week after Easter, with Passover coming to an end, and Spring has finally come to New York City. This morning the city is washed in windy sunshine, and temperatures are finally on the steady rise. You can tell from the number of slightly overweight hipster runners pounding the pavements of Brooklyn that summer is only a few jean sizes away – and I should know: I’ve become quite accustomed to wrapping up in a big black coat to ward of the crisp NYC winter, and any visible signs of what an American diet can do to an Englishman abroad…

When the first snows started to melt a few weekends ago, New York City looked like it was waking up from a very heavy Friday night: all those snowdrifts were playing temporary host to a million cigarette butts, discarded coffee cups and doggie bags (and not the kind you take away from a restaurant), all of which spread out in cold puddles across the city streets. But in typical NYC fashion this has all been efficiently cleared away, ready for the Spring and Summer to come.

It’s been an eventful few weeks, both in terms of research and research inspiration. At the beginning of March, for instance, I went to a fascinating talk at NYU from Jim Loewen, author of the influential Lies My Teacher Told Me (1995). Loewen challenged the audience to think about their own experiences of history education (and particularly the US Civil War), and in so doing revealed the redacted and racialised ways in which American history is constructed in US schools. Perhaps most striking was his account of ‘sundown towns’ -towns where, until relatively recently, black inhabitants were obliged by law to leave town before dusk. This widespread practice still resonates in rural towns US today, where de facto segregation still continues even if the law no longer officially endorses it.

Questions of race and inequity emerged again and again alongside other evocative themes at the American Anthropological Association Anthropology of Childhood and Youth Special Interest Group (take a breath) Annual Conference, held in Long Beach, California. Presentation topics ranged from gutter punk teenagers riding the rail (yes, this still happens! America’s subcultural answer to the gap year, you might say) to incarcerated migrant youth on the US-Mexican border, to adoption and baby trafficking in China, to my own research on quantum personhood and imagined futures in the Bronx. This proved an excellent platform for discussing the temporal dimensions of social identity, particuarly in relation to race, gender and class as aspects of young people’s lives.
Another strange highlight of this California trip was an experience of something quintessentially American: gun culture. I was surprised with a visit to a gun range up in the hills above Los Angeles, where, with far less regulation than one might expect at your average British paintballing venue, we were allowed to fire a Magnum 500 (think Dirty Harry). The experience, in a word: terrifying. But also exhilirating in the way that anything that goes ‘bang’ can be. Alexis de Toqueville would have been proud of my commitment to truly understanding the anthropology of American society….
Big guns aside, conversations about youth and imagined futures continued back in NYC when I gave a talk to colleagues at NYU, including Jon Zimmerman, author of the new Too Hot to Handle: A Global History of Sex Education. While seemingly tangential to my own research, Jon’s work on the ideological underpinnings of sex ed at different times in US History (preventing the spread of disease; as Cold War metaphor; as mouthpiece for conservative family values and functionalist sociology; and always as mechanism for ‘taming’ youth) made me think seriously about how sex and relationships are figured in the imagined futures of the seniors in my research. While it’s logical at first to frame aspirations and imagined futures in terms of jobs and economic or career ‘success’, these dreams form part of a tangled, complex picture of the future that also involves imaginings of intimacy and family. Many students talk about aspiring to be successful so that they can provide for their as-yet unformed families of the future. This fits with a more traditional view (also endorsed through sex education) about finding ‘the one’ and settling down to a serious relationship. Interestingly, though, most students have also discussed the winding trajectory that they think will take them towards ‘the one’ – and this is the picture of sex and relationships more commonly represented through media, and particularly media representations of college. But they also complicate this picture: most imagine that only through being with multiple partners can one finally get to know oneself well enough to know what one wants in a significant other. This is a much more sophisticated and subtle reckoning of sex and relationships than most might give teenagers credit for – and may go some way to explaining why (according to Zimmerman) most think sex ed is something of a joke.

Relationships aside, it’s an increasingly exciting time at Bronx High. We’re edging ever-closer to the end of the academic year, and for seniors this means that the once very distant, imagined world of college will very soon become a stark reality. Most are looking forward to the independence that broader college horizons will bring – most, but not all. The statistics for New York City suggest that many of these seniors will struggle to keep up with their peers in local city universities, possibly having to take remedial English or Maths classes to make up for slower progress at school. Many will take up to four years to complete a two year Associates Degree, meaning increasing debts and a decreasing likelihood of further study down the line. More still, of course, will not make it to college because the challenges of life in the Bronx make getting through high school a real struggle. As part of their effort to alleviate some of the barriers that students face, Bronx High has become a Community School – one aspect of Mayor de Blasio’s programme to integrate social services for young people. The city has seen some impressive success stories in Community Schools where incredibly dedicated principals have been able to harness some of the vast financial and infrastructural resources of NYC to improve life for those young people who need help the most. Some of these stories came out during the Risk to Resilience conference hosted at NYU and organised by Pedro Noguera. The conference was aimed at identifying best practice in community-focused approaches to education, and in frank terms illuminated the confluence of race and inequity in American society. It was incredibly inspiring to see so many individuals dedicated to helping others in their communities. Of course, these charismatic, dedicated individuals also highlight that so much of the success of these programs rests on the personal investment of the few, rather than in structural change that may have a lasting, profound impact on poverty in urban America, particularly for young people, and particularly for young people of colour. Here’s to hoping those structural, scalable changes lie ahead in the not too distant future. 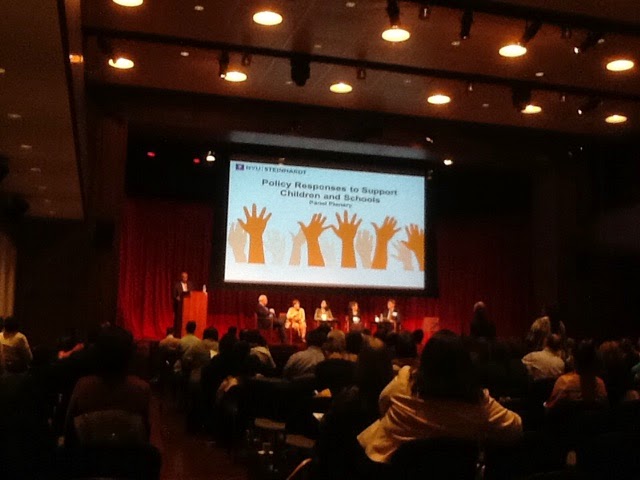