What do you want to be when you finally grow up? In 2014, on a humid September morning, I boarded a crowded subway train to arrive at the New York City public high school where I would spend a whole year exploring this question. I wanted to find out how high school kids make sense of their futures, and to better understand how schooling socialises us to imagine the future in particular ways. I also wanted to know more about the barriers that get in the way of achieving these futures, and how young people manage to overcome these challenges (if they do). I didn’t know then that masculinity would also become one of the more important and evocative themes in the ethnography. Understanding experiences and articulations of masculinity became a way for me to consider how neoliberal framings of aspiration are used to make sense of the future for young people in school. This is what I write about in my recent chapter in the edited volume Masculinity and Aspiration in the Era of Neoliberal Education: International Perspectives. 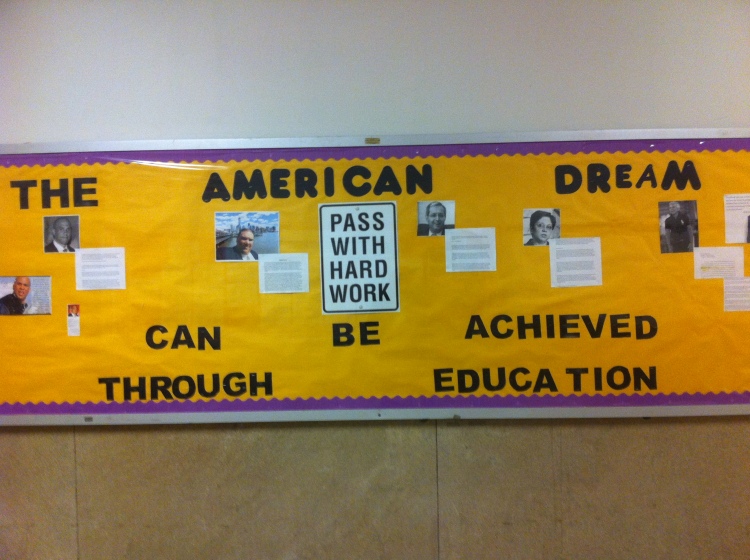 On that first day of the ethnography, and empty of students before the beginning of term, the school felt like an immense ship being prepared for a familiar but long and arduous journey. Custodial staff sweated around the school, towels tucked in T-shirt necks, and shouted an echoing commentary to one another down shiny corridors as they hammered, painted, and jerry-rigged the school back into shape. Teachers weaved in and out of classrooms and offices, plain-clothed, switching quickly between smiling conversations about summer vacations, tans, or new haircuts, and more serious hushed huddles about school gossip, office supplies, bureaucracy, and the coming storm of teenagers. The ebullient figure of the Principal loomed large in this scene, smiling and stating with happy sincerity that, ‘every day at (this school) is a good day!’ He gathered the teachers together to go through past progress statistics and talk about the year to come – a year that would be bigger and better not only for the students on the sometimes treacherous path towards graduation, but also for the school as an entity with its own collective aspirations and hopes for the future. To me, this moment of caesura – this hurried but confident fixing of costumes before curtains-up – is a fascinating example of how futurity is constructed and reproduced through the mundane processes of schooling. I think that it’s indicative of the ways in which schools help in both subtle and explicit ways to socialise us not only into imagining a horizon upon which we can fix our gaze, but also into constructing a sense of social identity that’s only sensible when framed in this particular future-gazing way.

Throughout the year of research, Bronx High showed itself to be a profoundly future-oriented institution in which students reconcile the privileging of imagined neoliberal futures with the often starkly different realities of their own experiences outside of school. The processes through which constructions of masculinity are fused into constructions of aspiration in the context of schooling emerge in numerous vignettes from the ethnography – for example, in how dominant forms of neoliberal masculinity are reproduced in school discourse at the institutional level, and in the persona of the school’s principal. Drawing on examples from the classroom, I also show in my research how male students negotiate between “tough” performances and narratives of masculinity framed in relation to educational failure, and articulations of masculinity that fit with notions of academic, athletic, and/or economic success. Through these examples I consider how multiple, entangled, concurrent, and often uncertain imaginings of gendered future aspirations are collapsed, made invisible, or rendered tractable under the weight of a single dominant, taken-for-granted neoliberal reckoning of what the future will look like for young men coming of age through the recession.

Andre, a successful senior student, was a good example of this experience. While he was very strategic in his planning for the future, and had a clear path laid out, he also told me: ‘You know, life is straight improv: you just make it up as you go along. You never know what’s going to happen or what kind of man you’re gonna be. And I wouldn’t want a roadmap for what my life is going to be like – that would be boring. Even when you do have a plan, you never know how you’re going to like it until you’re in it. Life is straight improv!’. Andre may think that “life is straight improv,” but he knows not to show this in how he articulates his imagining of the future to teachers, college administrators, and the keepers of scholarship money. As a noticeboard at Bronx High reminds us: “The American Dream Can Be Achieved Through Education! (Pass With Hard Work).”

One useful way to make sense of this complex reckoning of aspiration and masculinity, I argue, is through a quantum metaphor of personhood. I use a metaphor of quantum personhood to suggest that multiple and seemingly mutually exclusive discourses of aspiration and masculinity may in fact intertwine in the everyday lives of young men at Bronx High. This precarious balancing act speaks to the notion that the recent financial crisis represents a potential ideological as well as structural crisis for neoliberalism – in this case, by subtly challenging the extent to which neoliberal framings of aspiration can or should be accepted by young men as the “natural” foundations for particular imaginings of the future framed in relation to masculinity.