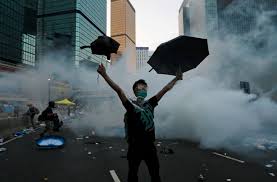 From New York City to Hong Kong (both places close to my heart), the past few weeks have provided good cause for reflection on the relationship between issues of civic participation, disobedience, and the place of ‘youth’ and young people in imagining new political futures.

Here in NYC, as the first golden brown leaves shimmered down in Central Park, the arrival of the UN General Assembly in mid-September brought about mass demonstrations around the connected issues of global capitalism and climate change. On 22nd September approximately 300,00 people marched through the streets of the city under the banner of the ‘People’s Climate March’, bringing traffic to a standstill and sending Instagram accounts into overdrive. This was the largest public demonstration focusing on climate change in history, organised to coincide with UN talks on environment. The intention was to show popular outcry about the current state of the planet. When the Yankees finished playing in the Bronx, and the Giants finished up in New Jersey, New York’s transit systems were flooded with an odd mix of baseball fans, football bros and hippies, activists, families and climate change voyeurs of all descriptions. It took a long time to get home that day.

While the People’s Climate March attracted individuals of all different ages and backgrounds, it was in many ways shaped by discourses of youth and childhood. After all, climate change is particularly susceptible to what’s sometimes known (to me at least) as the Whitney Houston doctine of childhood: we believe the children are the future (not the present), and all our actions to preserve the environment now are for the benefit of future generations. This is a discourse of activism fundamentally grounded in the temporal framework of generations – and it is also almost always the ‘youth’ who are imagined to be at the balustrades of the eco-revolution. As such, when things progressed from the peaceful mass demonstrations of 22nd September to the occupation and arrests at Wall St the following day, it was the face of angry young men and women that littered the newspapers. Families may demonstrate at the sanctioned events, but it will be the young – those idealistic, reckless, idealised youth with nothing to lose and so much hope for the future – that will be dragged away by tired looking New York City cops for a night in the cells. A few news cycles later and it’s like it didn’t happen; but in the moment, the youth were rubbing up uncomfortably against the estbalishment – a rather familiar framing of how disobedience and resistance rise and fall out of view in civil society.
Several thousand miles away, in my hometown of Hong Kong, secondary school students and university-age young adults were also on the verge of mass civil disobedience. The Occupy Central movement (Central is Hong Kong’s principal financial district and the seat of its legislative council) took cues from New York City’s Occupy Wall St legacy and transformed it into a movement focusing not on anti-capitalism per se, but on limited democratic reform of Hong Kong’s rather peculiar cocktail of hypercapitalism and reactionary pseudo-Communist politics. Young people in Hong Kong have for the past few weeks led an incredibly well-behaved, considerate, thoughtful charge towards a new kind of democratic engagement not seen in China for more than twenty years. the HKSAR government’s reaction couldn’t have been less ‘hip’ to the political times: tear gas, clubbings, alleged hiring of triad gangs as thugs and sexual assailants bent on breaking up the peaceful mobs all smack of a generation of politicians out of touch both with their popular political opponents and with the global media watching on. Seeing these scenes played out on the streets and thoroughfares of my own expatriate youth in Hong Kong made this kind of old-time political activity seem all the more surreal. The first wave of demonstrations ended last week with a fizzle; but already it seems that renewed reactionism from China will lead the youth to go wild – calmly, politely, peacefully – once more. It’s worth reflecting on how this very civil disobedience jars with a traditional framing of youthful resistance: the absence of bandanas and Molotov cocktails might actually lead to an enduring presence of politically engaged youth in Hong Kong.
In both these cases, imaginings of youth, and imaginings of future are at play, and it has been revealing for me to reflect on what specifically it is that defines this cohort of young people as ‘youth’ that are politically and civically engaged. What is interesting about the particular generational experience of school leavers and college students in Hong Kong, and their contemporaries in NYC, is that both have perhaps even less to lose than have recent previous generations. The global recession has made them suspicious of the promises to social mobility that are the backdrop to their participation in formal education; and where previous generations of young people may have been cynical or disengaged about their potential impact on political and economic systems (it’s easier to believe in individualism, after all), this generation is bouyed by the real, tangible impact that collective, technologically-engaged action has had in movements as disparate as the Arab Spring, Anonymous and the Occupy movement. They might actually make a difference – and they might even do it on their own terms. Don’t these sound like ‘youthful’ aspirations? Shouldn’t we be proud of these young people for flying the flag for real, progressive change in civil society? Aren’t they imagining the kind of civically-engaged, enlightened future that we might ideally like them to create in the lengthening shadow of late modern capitalist society?
The short answer to the above questions may well be yes; but it’s also interesting to consider that the qualities outlined above – the idealism, commitment, organisation and engagement borne of having little to lose in the current system of things – are not actually qualities solely imbued on the chronologically young. In fact, it might be that young people – school and university students – may be doing a good job of imagining and consuming the qualities of ‘youth’ that are actually open to people of all ages who may have also experienced a shrinking of their future horizons. In both New York and Hong Kong, those who have survived (or even thrived in) the recent recession may stay away from the demonstrations; but for those who are getting older without ‘growing up’ – without realising the dreams promised as the outcome of living ‘youth’ well, of attending university, of getting and keeping a well-paying job, of staying out of political trouble, of keeping one’s media-feed clean and adhering to the accepted avenues of acceptable rebellion/disobedience –  there is increasingly less to lose by not taking part. Perhaps the most profound impact that the civically disobedient youth of today can have on their elders is to make them feel ‘youth’ again – but this time, in a different, altogether more politically dangerous and exciting way.
Advertisement